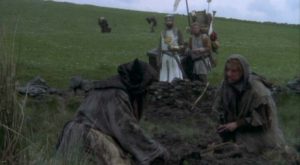 Not that long ago, I ran across someone on Reddit espousing the old historical myth that Medieval people walked around 365 days covered in dirt and filth, and never saw the inside a bathtub their entire life.

I didn’t have the following link at the time, but I’ve bookmarked it in order to deploy it the next time someone brings up this old, ridiculous chestnut that refuses to die:

Although I didn’t have that link, I did post the following paragraphs from Lewis Mumford’s book, The Culture of Cities, which does an amazing job demolishing this myth with actual historical facts:

Two other matters closely connected with hygiene remain to he discussed: the bath and the drinking water supply. Even as early as the thirteenth century the private bath made its appearance: sometimes with a dressing room, as we learn from a sixteenth century Nürnberg merchant’s household book. In 1417, indeed, hot baths in private houses were specially authorized by the City of London. If anything were needed to establish the medieval attitude toward cleanliness the ritual of the public bath should be sufficient.

Bathhouses were characteristic institutions in every city, and they could he found in every quarter: complaint was even made by Guarinonius that children and young girls from ten to eighteen years of age ran shamelessly naked through the streets to the bathing establishment. Bathing was a family enjoyment. These bath-houses would sometimes be run by private individuals; more usually, perhaps, by the municipality.

In Riga as early as the thirteenth century bath-houses are mentioned, according to von Below; in the fourteenth century there were 7 such houses in Würzburg; and at the end of the Middle Ages there were 11 in Ulm, 12 in Nürnberg, 15 in Frankfurt-am-Main, 17 in Augsburg, and 29 in Wien. Frankfurt had 29 bath-house keepers as early as 1387. So widespread was bathing in the Middle Ages that the bath even spread as a custom back into the country districts, whose inhabitants had been reproached by the writers of the early Fabliaux as filthy swine. What is essentially the medieval bath lingers in the Russian or Finnish village today.

Bathing in the open, in a pool in the garden or by a stream in the summer time of course remained in practice. Public baths however were for sweating and steaming and thorough cleanliness: it was customary to take such a purging of the epidermis at least every fortnight. In time, the bath-house came to serve again as it had in Roman times; it was a place where people met for sociability, as Dürer plainly shows in one of his prints, a place where people gossiped and ate food, as well as attended to the· more serious business of being cupped for pains or inflammatory conditions. As family life in the late medieval town deteriorated, the bath-houses became the resort of loose women, looking for game, and of lecherous men, looking for sensual gratification: so that the medieval word for bath-house, namely, stew, comes down to us in English as a synonym for brothel: indeed, it is so used as early as Piers Plowman.

Mumford goes on to describe how all of these tropes about the Middle Ages were actually much more accurate in describing the dirty and crowded conditions in the late eighteenth and all of the nineteenth centuries—the “insensate” early industrial towns of the Industrial Revolution.

Why do these lies persist? Where did they come from? As I’ve said so often before, one of the ways we are brainwashed into believing how much better off we are today than at any other time before the present is through controlling knowledge of the past. In other words, there is clearly a political agenda behind it. No doubt the proliferation such idiocy derives in part from our abominable education system. These outrageous myths are easy to debunk with a bit of knowledge. Consider this my small contribution.

And, just as a reminder, everyone didn’t drop dead at age 30 in the past, either.