Given the title of this blog, I couldn’t not post this article from the BBC:

We look to fiction for eternal truths about our world and timeless insights into the human condition – either that or giddy escapism. But sometimes, in striving to achieve any or all of the above, a novelist will use the future as their backdrop; and just occasionally, they’ll predict what’s to come with uncanny accuracy. They can sit down at their desk and correctly envisage, for instance, how generations to come will be travelling, relaxing, communicating. And in the case of John Brunner, a sci-fi author who grew up in an era when the word ‘wireless’ still meant radio – the specificity of his imaginings retains its power to startle.

In his 1968 novel Stand on Zanzibar, for instance, he peers ahead to imagine life in 2010, correctly forecasting wearable technology, Viagra, video calls, same-sex marriage, the legalisation of cannabis, and the proliferation of mass shootings. Equally compelling, however – and even more instructive – is the process by which Brunner constructed this society of his future and our present…

Ultimately, it is Brunner’s process that makes Zanzibar’s crystal-ball-gazing predictions so enduringly fascinating: he arrived at them via a combination of careful observation, listening and reading – that and a zany imagination. He was looking to the future, but it was only by being fully immersed in the present that he was able to see it with such unnerving clarity, effectively turning his typewriter into a time machine…

The 1968 sci-fi that spookily predicted today (BBC). In weird time-travel-paradox sort-of-way, maybe he even predicted this blog (which actually debuted in 2011).

(NEGRO. Member of a subgroup of the human race who hails, or whose ancestors hailed, from a chunk of land nicknamed—not by its residents—Africa. Superior to the Caucasian in that Negroes did not invent nuclear weapons, the automobile, Christianity, nerve gas, the concentration camp, military, or the megalopolis.

HUMAN BEING. You’re one. At least, if you aren’t, you know you’re a Martian or a trained dolphin or Shalmaneser.
(If you want me to tell you more than that, you’re out of luck. There’s nothing more anybody can tell you. 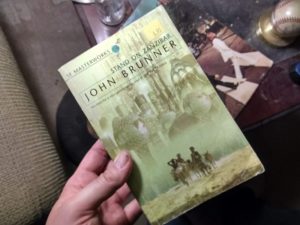 One thought on “Standing on Zanzibar”