“All truth passes through three stages: First, it is ridiculed. Second, it is violently opposed. Third, it is accepted as self-evident.”
–Arthur Schopenhauer

When I started this blog way way back in 2011 (whoa, has it been that long‽), one of the first things I wrote about was a series of lengthy posts about automation: What Are People Good For? I returned to that topic frequently over the years, although not so much lately. For instance, here’s an oldie from 2011: Job Myths & Realities. Here’s another: The New York Times Discovers the Jobless Future.

Now, I don’t agree with everything he’s saying about solutions. I have certain problems with UBI, and I have different ideas about the best solutions, but that’s a topic for another post. However, it is nice to hear someone talking about these problems rather than the usual “let them eat training.” Until now, elites have stubbornly stuck to the idea that the deindustrialization worked out great for everyone, and resisted any idea that vast swaths of America have been reduced to third-world living standards outside of a handful of elite citadels and gated suburbs. The anger in the Midwest and the Heartland came as a shock to the Neoliberal cloistered class when that anger led to throwing a monkey wrench into the gears of collective governance by knowingly electing an incompetent proto-Facist grifter for president. “How could this happen?” the elites wondered? They must just all be racists.

I’ve been listening to an old interview between Yang and Ezra Klein. Klein is the poster child for the kind of coastal-dwelling hyperprivileged credential-class elite that lives in a permanent bubble. I get the feeling he’s never even been to flyover country, and would probably be more at home in downtown Kuala Lumpur than he would be in my location in Milwaukee. I’m sure Midwesterners would be as exotic to him as the headhunting highlanders of New Guinea. In the interview with Yang, he rolls out every trope in the book to deny that there’s any sort of problem with jobs or automation, including the hoary old, “we all used to be farmers, and now look at us!” trope. Get better journalists.
Last Week Tonight with John Oliver also did a terrible job, rolling out the typical lazy-thinking and specious arguments against the impact of automation and deindustrialization. Sometimes YouTube comments are intelligent: 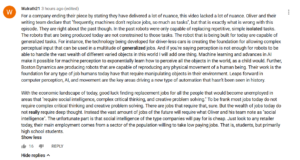 For a much better discussion, here’s a clip from the Sam Harris interview (YouTube)

I also wrote way back then about how meritocracy is a sham: Thoughts on Meritocracy. People may have thought I was harsh or talking out of my ass back then, but with the recent college admissions scandal (“Varsity Blues”), I don’t think people are as sold on the idea of meritocracy anymore. Once again, the emperor has no clothes. I think the reason that this incident worried the powers that be is that it strikes directly at the myths that are used to justify the obscene inequalities we see today.

The other “outside” topic I’ve written about over the years has been what’s often referred to as Modern Monetary Theory, or Functional Finance. Well, that used to be way out there. But now it’s mainstream enough now to engender attacks from the press. One was via Paul Krugman at the New York Times, and another from the Socialist magazine Jacobin.

Economists who have developed the MMT paradigm, especially Stephanie Kelton, Randall Wray and Pavlina Tchernva, have responded vigorously. One again, wherever you fall on this topic, I think we can agree that this debate is finally . Tcherneva responded to the attack on MMT by Doug Henwood with a piece of her own for Jacobin: MMT Is Already Helping. Incidentally, much of my writing on economic history has been informed and inspired directly by their publications.

I can’t keep track of all of these, but interfluidity has a good roundup of the MMT Wars: MMT streetfighting

Another fictional characterisation of MMT finishes in total confusion (Billyblog)

I think it’s pretty clear that we’ve tentatively moved into the “violent opposition” phase. And that’s the best news I’ve heard in a while. I don’t often toot my own horn or pat myself on the back (it’s not in my nature), but I hope you’ll permit me a modicum of self-congratulation that the topics that this little blog have dealt with over the years are finally being discussed in mainstream media venues.

EDIT: More good news: apparently Chicago elected six Democratic Socialists to their city council (The Guardian). Kind of ironic that they’re pulling ahead of us here in Milwaukee, where we were run by Socialist Party mayors until 1960.

8 thoughts on “Shifting the Overton Window”