Average water system rates rose 41 percent between 2010 and 2015, and experts predict the average monthly cost of water will increase by $49 over the next five years, up from the current national average of about $120 a month. If that happens, water will become unaffordable for one-third of American households. (According to the EPA, the threshold for water affordability is 4.5 percent of household income.)

The American Society of Civil Engineers estimates that 2 trillion gallons of treated water are wasted each year owing to main breaks.

Each day, the United States loses an estimated 6 billion gallons of clean drinking water to leaks – roughly enough to supply all the homes in Chicago, Detroit, Houston, Indianapolis, New York, Los Angeles, and Seattle combined – some 15 million households in total.

Currently we are having (as a species) over 120 million babies per year. This works out to over 335,000 human babies born every day – compared to a total extant population of all the other Great Apes (bonobos, chimpanzees and gorillas) of about ~200,000!
https://cassandralegacy.blogspot.com/2017/11/why-do-we-need-jobs-if-we-can-have.html 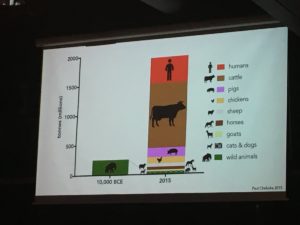 There was no marriage gap between rich and poor a couple of generations ago, but one has been opening up. The Office for National Statistics divides Britain into seven social classes. According to a study prepared for The Spectator, someone in the top class (i.e., company directors, university lecturers, etc) is 48 per cent more likely to be married than someone in the bottom social class (builders, office cleaners). At the turn of the century, the gap was 22 per cent. To those who think marriage is a quaint irrelevance, such figures don’t matter. But if you think that marriage is the most powerful sponsor of health, wealth and education, then it ought to be alarming. A new inequality is being bred in our society. Why?

Figures for the proportion of children born outside marriage seldom rose above five per cent from the Victorian era right up to the 1960s. Then things started to change. By the time of Prince Charles and Lady Diana’s wedding, in 1981, it was 13 per cent. Since then, it has almost quadrupled. And the decline of marriage has been far more pronounced in working-class areas than in genteel middle England. The Marriage Foundation recently discovered that 87 per cent of mothers from higher income groups are married today, compared with just 24 per cent of those at the other end of the social scale

Men travelling first class tend to weigh more than those in economy, while for women the reverse is true.
http://www.bbc.com/news/business-41835933

Title: Why Cities Boom While Towns Struggle Wall Street Journal. Kevin W: “Important takeaway – ‘From 2010 to 2016, large cities generated 73% of the nation’s employment gains and two-thirds of its output growth. A study by the Economic Innovation Group found that from 2010 to 2014 just 20 counties accounted for half the new business formation in the entire U.S.’”
https://www.nakedcapitalism.com/2018/03/links-3-16-18.html

The subprime car-lending industry — charging exorbitant rates for car-loans to people least suited to afford them, enforced through Orwellian technologies, obscuring the risk by spinning the debt into high-risk/high-yield bonds — is collapsing. The three most prominent lenders in the subprime auto sector shut down spectacularly and suddenly through bankruptcies and fraud investigations (and the bankrupt ones are said to have been fraudulent!).

Meanwhile, the borrowers — lent money that everyone understood they couldn’t afford, backed by assets that depreciated by 50% the day they were acquired — are defaulting and missing payments like crazy, at a rate that puts the subprime housing bubble in the shade.
https://boingboing.net/2018/04/09/self-driving-off-a-cliff.html

Facebook donated to 46 of 55 members on the committee that questioned Mark Zuckerberg
https://www.reddit.com/r/worldnews/comments/8aj0gw/facebook_donated_to_46_of_55_members_on_committee/

If plastic waste in the ocean were recycled into LEGO bricks, it could build 19 Empire State Buildings.
https://www.treehugger.com/plastic/how-many-skyscrapers-could-be-built-years-worth-ocean-plastic.html

Doctors have the highest suicide rate of any profession. In the United Sates, it’s estimated that one doctor dies by suicide every day.
https://cmajnews.com/2018/05/29/has-suicide-become-an-occupational-hazard-of-practising-medicine-cmaj-109-5614/

22% of men without college don’t have jobs.
https://theconversation.com/22-of-men-without-college-dont-have-jobs-heres-why-theyre-being-left-behind-97055#link_time=1528114899

…no progress has been made in reducing income and wealth inequalities between black and white households over the past 70 years, and that close to half of all American households have less wealth today in real terms than the median household had in 1970.
http://www.wiwi.uni-bonn.de/kuhn/paper/Wealthinequality_7June2018_edt.pdf

“By 2050, the world’s air conditioners would be using the current electricity capacity of the US, the European Union and Japan combined.”
https://www.bbc.com/news/business-44466214

Taken together, it seems that the majority of our U.S. population is currently under the influence of some form of psychoactive substance or drug, whether prescribed or not, or whether legally used or not, that changes brain function, mood, consciousness and behavior. And, let’s not forget alcohol in this context since 70 percent of U.S. adults drink alcohol, and more than 1 in 4 binge drink.
https://theconversation.com/suicide-nation-whats-behind-the-need-to-numb-and-to-seek-a-final-escape-98137

J.R.R. Tolkien and Adolf Hitler both fought at the battle of the Somme.

There are whales alive today that were born before Moby-Dick was written in 1851.

A decapitated planarian flatworm grows a new brain complete with all its old memories.

Splenda was an insecticide that became a sweetener when an assistant misheard an order to “test” it as “taste” it.