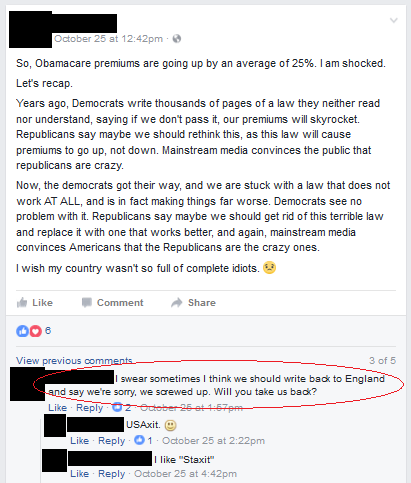 Yup, nowhere better to escape the horrors of government medicine than merry ol’ England :). The “Keep Government Off My Medicare” stereotype of Republicans is well warranted.

And the icing on this is that the high-school friend who posted this has been unfortunately cursed with very poor health (stemming from obesity). In fact, last year he posted a health-care bill which, if I recall correctly, was $35,000!!!

But, for election day (or erection day if you’re in Japan) I’ll share my favorite story, this one  from my mom. Being from the white underclass in the Rust Belt, and being over fifty, most of her friends and acquaintances are rabid Republicans. One of her former co-workers/friends is a woman in her thirties, very much the stereotype in my eyes (uneducated, overweight, dumpy, lower-middle class income, etc.). She is a fanatical Republican. One day, my mom, tired of her political trash talking, decided to ask her point blank, “[Person’s name], why are you a Republican?” Would you like to know what her exact response was?

Happy election day, folks. This is the first one in my voting life I’ll be watching from the sidelines, making me part of the largest party in America (the nonvoters). In the end, I just got tired of caring

P.S. Sorry for the radio silence, but I’ve yet again bit off more than I can chew. I’ve written before about the evolution of inequality and states before, most notably in The Rise of States, Inequality and Economics. I’ve also covered the work of Marvin Harris and Brian Hayden before. But lately I’ve been enmeshed in Hayden’s work, particularly his Feasting Theory. What I find fascinating is how much it describes about how inequality works today – workaholic productivist monomaniacal individuals claiming to work harder than everybody else and gaining status by getting everyone else into debt to them. Despite what Max Weber said, the Protestant Work Ethic actually dates back to the Stone Age. And it was apparently the ongoing need to generate surpluses to keep up with these feasts which led us to stumble into agriculture in the first place (if the theory is accurate), with all of the problems that entailed. So, rather than than the need to pay off future debts leading to overproduction leading to intensification being a new thing, it may have been the original thing that led to our downfall!

In any case, I’ve been debating whether to put up a longer version with extensive quotes and detail, or a shorter, “punchier” Medium-friendly version. I’ll probably do both at some point; I’ve got the former mostly written.

6 thoughts on “The Republican Brain”