A while back, I wondered if the low unemployment rate was down to simple demographics.

The reason I thought that was this chart:

While It’s harder to find data for other countries, here’s Canada. It appears to bottom out in the late nineteen-eighties:

In the U.K. it was more of a bactrian instead of dromedary hump, possibly due to the rationing years. But the cliff still occurs at approximately the same time: 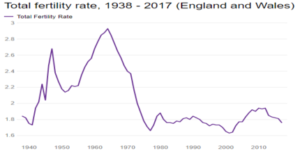 Wikipedia has more data on it: Mid-twentieth century baby boom. 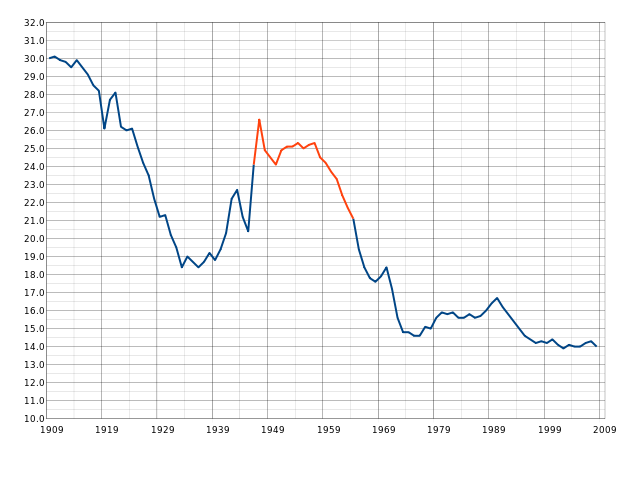 Note that we’re also hearing about how the stock market—where many retirement savings are invested—is at all-time highs. This puts retirement in reach for many baby Boomers.

This means that the people at the bottom of the trough would be my age and younger – 47. Again, note that while it increases slightly, the birth rate never recovers.

Now, I’m told that these are supposedly my “peak” working years. That is, workers in my age range are desirable – not too old, but old enough to acquire experience. But there are hell of a lot less of us than there have been in the very recent past!

That’s before you consider the demographic effects of increased mortality and incarceration which took such a huge toll on people who became adults after the sharp turn to the Right that began with Reagan in 1980. The “deaths of despair” began increasing after the year 2000. That means a lot of people are simply “missing” from the work force due to the tragedies of modern life. I’ve seen a heartbreaking number of people around me dying before their time–people in their thirties, forties and fifties. 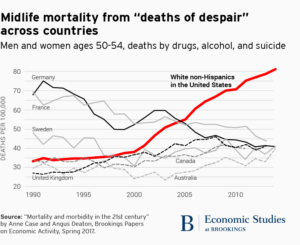 When I first posited the idea, some readers had objections to it, and they made very good points. But I still thought that demographics must have some sort of impact, given the charts, above.

What brought this back to my attention was this article posted at TYWKIWDBI, which deals specifically with Minnesota, but is also relevant to the U.S more generally:

The Minnesota economy will also be squeezed as the last baby boomers retire in the decade. The 3 million-person labor force will essentially stop growing in the first five years of the 2020s, demographers say, and pick up only slightly after that.

This leveling off is already being felt across the state. Job vacancies have outnumbered the unemployed in Minnesota for two years. Businesses, governments and ordinary people find it’s harder to get things done. Hiring is especially challenging at restaurants, factories, schools and hospitals. Things aren’t delivered on time.

Such difficulties are mainly seen as effects from an economic upturn that, having started after the 2008-09 recession, has lasted longer than any other. But they’re also a product of the less-understood slowing of population growth…

This pattern is projected to continue into the 2030s and 2040s. There were so many baby boomers that their deaths from old age will offset the number of people being born or immigrating. By 2034, the Census Bureau says there will be more Americans over 65 than under 18. Similar challenges exist around the world. As populations become larger, it’s harder to sustain previous high rates of growth. 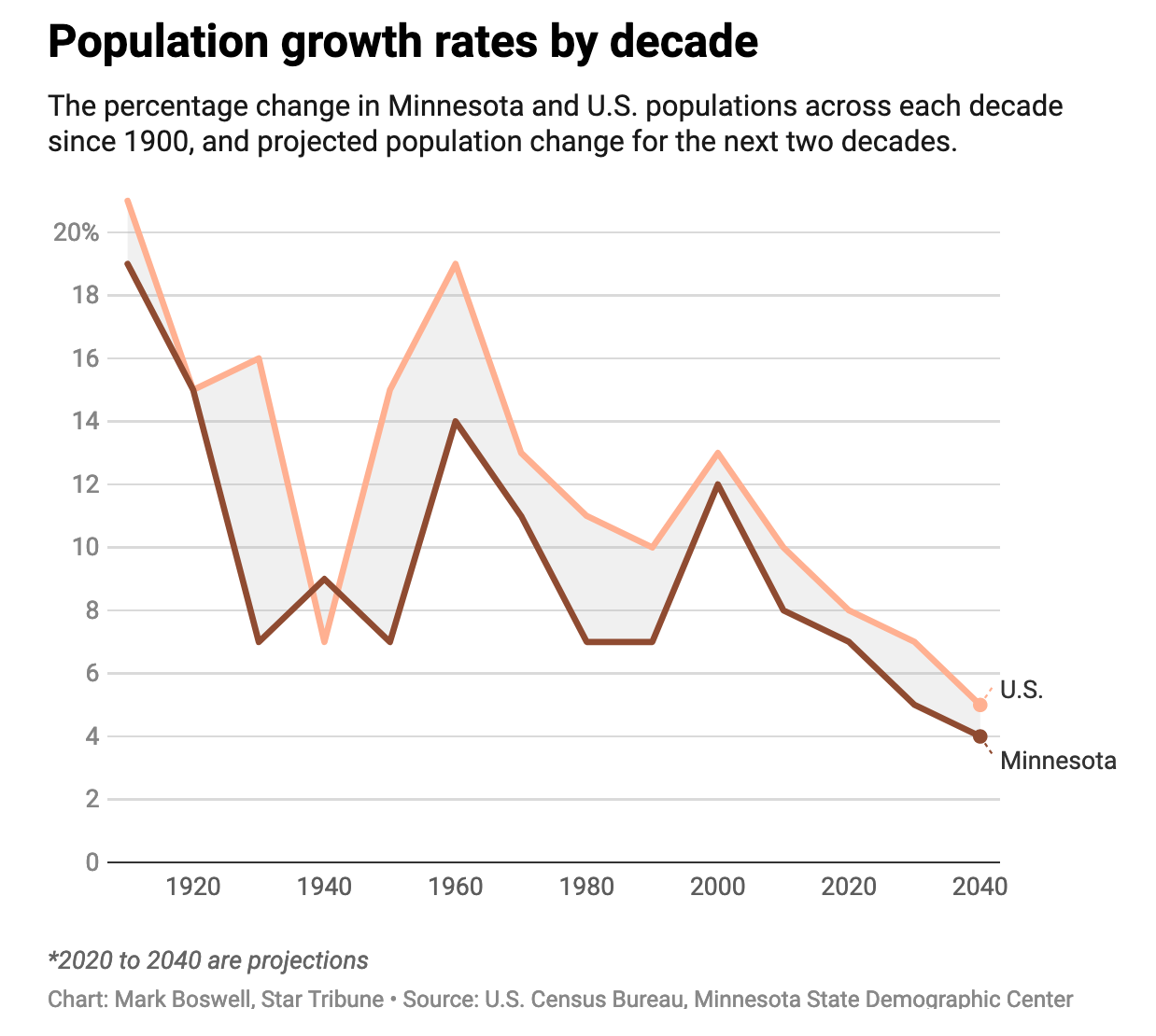 Which confirms the observations I made back then.

The precedent for the overall size of the economy has been set by the Baby Boom. Economies do not like to shrink, if for no other reason than to generate sufficient growth to pay back past loans. Thus, employers will continue to search for enough employees to keep the economy the size it was during the Boomer years with a shrinking pool of workers.

That’s excellent news for us workers, as it places a modicum of power back in our hands instead of being totally on the side of employers. There are the headwinds of automation and globalization to contend with, of course, complicating the situation. But if there is less competition for jobs, perhaps colleges will not be able to turn entire generations of Americans into indentured servants. They will lose their role as guardians and tollbooths to a moderately comfortable middle-class life, which would be a positive development, indeed.

This will, of course, be framed as horrible, horrible in the mainstream media, which is owned by major corporations and run for their benefit. Of course, the reason the media will declare this as a very serious threat is precisely because it benefits workers over capital and threatens to raise wages for workers–a process which is so far being fiercely resisted by big business.

There will be urgent and persistent calls for increased immigration in the mainstream corporate media, especially if there is a trend of rising wages. While Trump’s immigration policies are barbaric, if the average American sees the benefits of a tight labor market, Trump will (unfortunately) remain popular. the Left has really shot themselves in the foot by encouraging mass immigration for the past several decades, which decimated what used to be their base of working-class people, as the chart above shows. Instead, they counted on support from a small niche demographic of wealthy, upper-class urban professionals who did not have to compete with immigrants and benefited from the low wages in the service sector.

That came around to bite them. That’s not enough to win. Immigration was a wedge here in the States, and we saw it as a major wedge in the most recent U.K. election which gutted the Labour party. Both ostensibly “leftist” parties paid the price for abandoning their working-class constituencies by embracing the globalism touted by what’s often been termed the “professional managerial class” (PMC).

It should also be noted that recessions generally take a decade to shake out “naturally” that is, without the appropriate Keynesian counter-stimulus. Since the meltdown began in 2008; 2018 would be when we would expect the economy to start recovering in earnest, and this is pretty much what occurred. Again, unfortunately this occurred when Trump was in office. Of course, he’ll tout his tax cuts, but there is zero evidence that this has had any effect besides enriching the donor class. The quality of the new jobs is another matter as well, but that’s for another time.

So natural economic cycles have joined with demographics in the U.S. to encourage a relatively favorable economy for average people, at least for now. Trump will run out in front of the parade and claim he is leading it. The challenge for the rest of us it to ensure that the means of preventing rising wages and worker empowerment employed by corporations will not be effective. That will give us some ability to make things better in the future.

Incidentally, the population rate in the U.S. continues to decline, most likely because the demise of the middle class: US has slowest population growth rate in a century as births decline (The Guardian)