The first is that it’s a lot easier to criticize capitalism than it is to defend socialism.

This is obvious. We’ve seen that even the most ardent defenders of capitalism fully acknowledge many of its shortcomings, as Peterson does in the debate. They are fully aware that there are many problems with capitalism, and sometimes even serious problems with it. Anyone who denies this would look like an idiot.

So that’s a good place to start.

Rather than immediately set up a false dichotomy, why not point out the shortcomings of the current system and go from there?

So many debates assume, implicitly or not, that there is some sort of “-ism” that we can simply plug in and replace the existing system root-and-branch.

I think it’s plain to see that there is no such “-ism.” And so therefore many people just give up and accept the status quo, or make sweeping, facile statements about “overthrowing capitalism” or some such, without any real idea of what they’re talking about. Such people are easily dismissed.

And yet, the current problems with capitalism are not so easily dismissed.

The problem I see is that many of the specific, targeted solutions to specific problems under our current form of capitalism are dismissed and waved away as socialism, as if that was somehow an argument.

Stick to the issue not the -ism.

Rather than failings, I think we should focus on how much socialist ideas are responsible for the the prosperity we enjoy under our brand of so-called capitalism.

Whether that’s worker protection laws (currently being gutted), advanced technological infrastructure, or government subsidies keeping “free” market prices reasonably stable, many of the concepts and practices that make current Industrial societies as wealthy and prosperous as they are are as far away from doctrinaire “Classical British Liberalism” as can be.

A lot of what Marx was writing about doesn’t even exist today. And besides, it’s not like Classical British liberalism didn’t kill anybody. The people of Ireland in the 1840’s might have something to say about that. As a percentage of the population, we’re talking about deaths that are on par with Stalin’s crimes. Yet it somehow doesn’t count because it happened earlier?

From my understanding, what Marx was saying was that the inherent contradictions of capitalism would eventually cause the system to undermine itself, making it less and less viable over time. And from where I sit, this prophecy seems to be coming true.

He wasn’t saying that capitalism was worse than feudalism, or that mass-production of commodities didn’t confer benefits to a lot of people. Rather, he argued that capitalism wasn’t an end-stage of human social organization, but a necessary transitory one that we needed to pass through. It *had* to be transitory, for several reasons.

The simplest and most basic one is that nothing grows forever. Capitalism, as currently constituted, requires ever-increasing production, ever-growing surplus, and ever-higher profits. Like an airplane or bicycle, its forward momentum is the only thing that keeps it stable and upright over time. But the idea that you can constantly produce more and more every single year implies that needs and wants—and more alarmingly the biosphere itself—are infinite.

So that’s one contradiction.

Related to this is the fact that capitalism requires scarcity even while producing abundance. The commodities that capitalists sell need to be reasonably scarce, or they will not command a sufficiently high price (i.e. exchange value) in markets to justify their production, and that is what capitalists care about rather than actual use value. And so, you need to keep even abundant goods artificially scarce. You also need to keep people persistently dissatisfied with what they already own so to that they will keep purchasing “new and improved” items—hence the “organized creation of dissatisfaction” that the early advertisers (honestly) claimed was their reason for existing.

Simply put, too much prosperity is bad for business.

And one that has come into very sharp relief today is the fact that capitalism relentlessly drives towards more efficiency, but such efficiency necessarily reduces the amount of total labor that needs doing. Yet everyone is required to sell their labor as a basic condition of survival!

This has recently been brought into sharp relief with recent developments in automation and AI, but it’s been a serious problem for a long time. It’s a problem all over the world today where capitalism has displaced more traditional arrangements not predicated on wage-earning and constant, never-ending growth.

Clearly there is, in fact, a “lump of labor,” at least at any single point in time, otherwise unemployment would never have existed throughout history! Otherwise, how do we explain things like the Luddite Revolt and the Captain Swing riots (just to mention two of them). And, even if the “jobs we can’t even imagine” do eventually manifest themselves, what are displaced workers supposed to do in the meantime under a “pure” capitalist (i.e. non-socialist) system?

It was basic contradictions like these that Marx could see by taking an unflinching look at the system that had developed out of earlier forms of economic organization. He felt that the capitalism of his time could not continue. And, to some extent, these developments have already undermined the kind of imaginary libertarian capitalism taught in economics textbooks, but that exists nowhere in the real world outside of them.

I mean, big business and corporate bosses are the frequent recipients of all sort of largesse from governments that we might consider to be socialism (or “corporate welfare”). Are they really going to then turn around and argue that socialism has been a total failure? Has it failed for them?

Why it it only a “failure” when it improves the lives of the average citizen?

Instead of arguing for Marxism (whatever that means), why not persistently argue for all the ways that socialism has worked all around the world, and continues to work? Rather than constantly running from the Black Book of Communism, how about talking about how many lives socialism has actually saved through initiatives like universal health care (where it exists), public assistance, worker housing, and the like. I mean, a hell of a lot of the higher living standards we enjoy under capitalism are not, strictly speaking, due to doctrinaire capitalism.

As an aside, the very first thing I ever heard Jordan Peterson say (it was on the Rogan podcast—I had no idea who he was at the time) was to belittle college students for daring to criticize capitalism on their iPhones. So you might say I was predisposed not to think of him as any sort of “deep thinker” from the very start.

This argument is so tired and cliched that it has its very own cartoon: 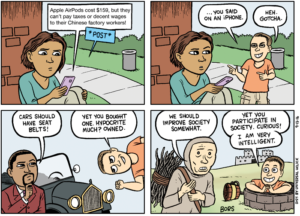 Not to mention that almost everything in the iPhone was created through publicly-funded government investment and research. And yet, the public now has to buy back their own investment from the richest company on earth, one that sits on piles of cash it doesn’t even know what to do with (while simultaneously being told by politicians in both parties that our government is “broke”). The public can’t even afford to go to sports games in the countless sports arenas and stadiums that they (we) pay for! 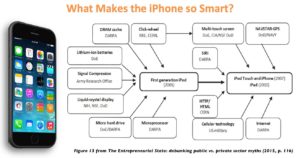 Why don’t we talk about that? I wonder, is socialism really such a failure after all?

Finally, to criticize social scientists for being secret “Marxists” not only smacks heavily of McCarthyism, but is also like criticizing biologists for being Darwinians. See the bonus below for why. What does that trope exactly mean, anyway?

Anyway, those are just some random thoughts…

BONUS: I thought this video by someone calling himself the “Finnish Bolshevik (!)” made some good points regarding the whole “Capitalism is the only system aligned with basic human nature” argument:

[Peterson] repeated over and over again that, ‘yeah, there [are] problems, but there’s nothing that can be better.’ He said that climate change is not as big a problem as many people think it is. There’s always going to be inequality but we’re trying to deal with it to the best of our ability…that’s the typical moderate position that, ‘Yeah, it’s not good, but this is the best we can do. Stop talking about any real change…’

Then, Peterson basically does the whole ‘human nature’ argument. He says that humans are naturally different, hence you have this natural hierarchy, therefore Communism supposedly goes against human nature and is impossible, and Capitalism supposedly corresponds to human nature. But once again, he doesn’t know about Marx. He doesn’t know that Marx talks about natural differences in people, and that it’s not a problem for Communism. And it’s just a foolish idea to think that capitalism corresponds to human nature, as if you let a feral child loose into the wild for a year, and then he’s going to build Wal-Mart.

No, Capitalism does not exist in what Rousseau would call a “State of Nature.” A hunter-gatherer society exists in nature. Capitalism exists in civilization; in society. In a state of nature, we had a hunter-gatherer society—what Marx called “primitive communism,” because that was a society where everybody worked, where there was no exploiter class, where there were no different classes, there were no means of production, there was no property—that is how humans lived for 250,000 years! That is how humans lived in a state of nature.

And that’s why, if you put a human in a a hunter-gatherer society, he’s going to act a whole lot different than in a slave society. A hunter-gatherer is going to think that it’s perfectly natural that land is not owned by anybody. He’s going to have a ‘naturally’ communist concept when it comes to land ownership. Somebody in a slave society is going to think that it’s perfectly natural that we have slaves. Every society has always said that ‘this is the way it’s supposed to be—this is what human nature is.’ But human nature is malleable, and it greatly varies based on what kind of economic system you’re in.

And that’s the basic Marxist argument. That it really is the class struggle that determines how we act. It defines how our entire society is structured. Different classes = entirely different society. Slaves: slave society. Workers: Capitalist society. Hunter-gatherers: primitive communist society…