I came across an older episode of Tangentially Speaking on my computer, so I’ll lazily recycle Chris Ryan’s words:

[8:16] “Thank you to all of you who wrote to me expressing your opinions and your encouragement and your hesitations and everything else after the intro to the last episode where I talked about the conundrum and the conflicts that I’m feeling about this project. It is so cool, really. Really, it’s so cool for people to be writing to me from, you know, dropping out of the sky and expressing your support and your concern. I feel like I’ve got so many friends that I haven’t met, and that’s a wonderful, beautiful feeling to have. So I really–thank you for that.”

And I echo his sentiments. Thank you for all your letters of support and encouragement.

Right now, we’ve just been hit with another snowstorm; this one has already dumped well over a foot based on when I walked out my door. I’m at Hi-Fi Cafe right now, but I have a long afternoon of shoveling when I get home, and somehow figuring out how to shovel out my mom’s house as well. On a lighter note, I’m apparently officially their most dedicated customer:

At the moment I’m just enjoying the time off and not having to commute across town in blizzard conditions. I’ve really got to get out of here. Some of you who wrote to me are Milwaukeeans/ex-Milwaukeeans/Wisconisinites etc. Wherever you are, take care. Honestly, I don’t know how you (we) do it anymore. 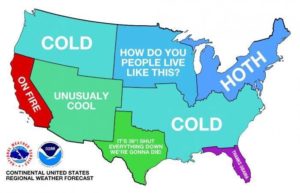 My internet is now restored, so I’ll have time to respond to all of you hopefully over the rest of the week. Before I do anything, I’ve got to close out my mother’s estate, which is still a ton of work, even a over year later. It also means selling the house. I have no idea how to do that, but I want to do it as economically as possible since I’ll probably have to live on the proceeds. Right now I’m looking at For Sale by Owner. But with the epic weather we’ve been experiencing (which seems to happen every year now), it will most likely be Spring before I can realistically even think of hitting the road to anywhere (When I say ‘Spring’ I mean on the calendar—Wisconsin has no true spring. It goes from cloudy and 30-40 degrees to 70’s and sunny sometime around late May/Early June. Those of you who live here will know what I’m talking about).

I’ve got some thoughts loosely based on a post I wrote on Ran Prieur’s subreddit, which I see he has addressed on his site. I should get that up soon. Incidentally, would anybody be interested in a r/hipcriminals subReddit for discussion of posts?

I’ve also seen a couple of articles on the 200th birthday of John Ruskin, whose thoughts, as I learn more about them, echo my own in many of ways. So here’s a quote that’s apt for clearing out an estate. Turns out, getting rid of everything you own is surprisingly *hard*:

“Every increased possession loads us with new weariness.”

Was Ruskin the most important man of the last 200 years? (BBC)

Apparently, the new Marie Kondo television program has got people saying goodbye to their possessions and giving them away to thrift stores en masse. This is leading to a massive glut, which I’ve definitely noticed myself. Consignment stores are throwing in the towel left and right and often going out of business entirely. Antique stores are flooded and have signs outside their stores stating that they won’t buy anything from anyone, ever. Even thrift stores are becoming reluctant to take more stuff. The antiques my mom collected are now practically worthless and tough to get rid of. Not great for me right now, but great for changing social mores away from overconsumption.

Why are antiques now so cheap? (Marginal Revolution)

This article reminded me of another trend but that is more long term. We had to move my mother out of her unit not that long ago as she was too old to stay there and had already broken her hip and had to wait until somebody checked on her to find her.
We had to get rid of most of her stuff as she could not take it to the nursing home she was moving to. A lot of the smaller goods and trinkets we took to charity shops and I saw how the shelves were almost overflowing with such good quality things. And I mean good quality stuff.
It then occurred to me that nearly all her generation was either passing away or downgrading or moving to a retirement home to live. As these people had to downsize in any case, or had family having to get rid of their things, a lot of this stuff was going to such charity shops which explained possibly why there was so much stuff there. As the baby-boomers age even more, I would expect the tempo to increase here.
[…]
The very same mechanism is driving the collectibles market in a downwards spiral of too much inventory coming on the market as baby boomers and their parents downsize, while millennials could care less about the debris field they leave behind, they aren’t into it.
[…]
More and more of that stuff will end up in landfills since fewer and fewer in the generations after the Baby Boomers have the 3-level homes to house all that shit. 2 bedroom apartments if they’re lucky, or 1 small room in a motel. Or homeless. As George Carlin said, “Houses are containers for holding crap,” and millennials won’t be buying those 3-level, crap-holders.
[…]
One of my siblings is a major hoarder (real problem), who also sells antiques and used items in a number of different stores in their area (western PA). The three stores where they work are LOADED to the gills, and I regularly hear tales of lots of “looking” but not much buying.
Indeed, it’s true that as the older generation – now mainly the Korean War gang – moves into retirement/nursing homes, they are purging their stuff, and the boomers aren’t far behind.
[…]
What is this ongoing trend going to do to Target and other retailers of cheap Chinese crap as well as clothing sales? It’s got to hurt them. Not only are younger people buying less, but now they have all this almost free higher quality stuff available.

The things you find in the time capsule: 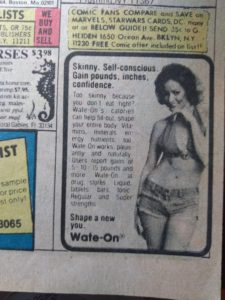 Yep, once upon a time women were terrified of being too skinny and looking for ways to help them put put on weight. Then we discovered putting sugar in everything. Now our magic beans do other things.

Postscript: a lot of you who wrote to me are dealing with various health conditions. I was in a very serious relationship with a woman who had severe Fibromyaligia—to the point where she was basically disabled. So I have some idea what it’s like. I’m glad I could provide you with some distraction and food for thought. Take care.

P.P.S:A few of you mentioned Morris Berman’s writings. Funny enough, not only have I followed Morris Berman’s blog and read a number of his books, he was actually one of the first commenters to this very blog! All the way back in 2011, shortly after I first started working on the hipCrime Vocab, I wrote a 9-part series called Is Japan the Future?. I posted link to it on http://morrisberman.blogspot.com/. Berman was actually working on a book about Japan at the time (which has since been published), and wrote to me encouraging me to publish what I wrote in book form. It was very kind of him to do so, especially given that I’m essentially nobody. I know he’s moved to Mexico and seems to like it there.

Also, some people suggested teaching English abroad. I’ve actually contemplated that idea before. A few years ago I visited WESLI in Madison. Anyone have any experience/thoughts on their program? Thanks.