Just a quick thought: are we experiencing a tight labor market primarily because of simple demographics?

I haven’t heard this idea explored anywhere else (to my knowledge). I find this odd. I can recall, many years ago when I was first starting out in the hardscrabble job market with few prospects and little money, being told that as much as things sucked at the time, things would get better because the Baby Boomers would eventually retire. This would, in theory, create a large demand for replacements for the retiring Boomer wave. And since subsequent generations had far fewer workers, there would be greater demand for labor, and hence an easier time finding jobs. Skills would be in much more demand, they said, because the next generation of whatever profession (architect, engineer, lawyer, accountant, nurse, etc.) would be smaller.

Are we seeing that prediction finally come to fruition? It seems odd no one has considered this.

Now for the data: it’s easy to see that U.S. birth rates plunged off a cliff after 1970, and remained depressed until 1980. The whole decade has been called the “Baby Bust.” This was due to things like the contraceptive Pill becoming widely available and women entering the workforce en masse. It was helped along by a shitty economy caused by a dramatic spike in oil prices, the catching up of the U.S.’s key industrial rivals into the global Market (Germany, Japan, Taiwan) and a host of other factors. That led to the unraveling of capitalist postwar prosperity—the “Last Days of the Working Class” as Jefferson Cowie’s called it in his book of that name.

This is the decade I was born into. Now “we” are approaching the peak of our “earning power” (ha!). But the simple fact remains that the primary work generation is far, far smaller than the one that preceded it. It’s clear from the graph above. And note that even though birth rates rose again in the mid-1980’s (the so-called “echo boom”), it still does not reach anywhere near Baby Boomer levels. Nor did any subsequent cohort.

Someone born in 1970 is 48 now. Someone born in 1980 is 38. These are the prime workforce years! If Baby Boomers are indeed exiting the workforce, as I suspect they are, then there are far fewer workers coming up to replace them. Hence the uptick in hiring.

And there are reasons to believe that they (along with their elders) are leaving the workforce. It makes sense. They are the last generation for whom reliable pensions still exist. Even for those stuck in 401K systems, the rising stock market, pumped up by artificially inflated stock values due to widespread stock buybacks, means that retirement is within reach right now. And, on a grim note, a number of them are just bumping themselves off with Fentanyl or some other method.

What that means is a labor shortage, for the first time in recent memory.

I can’t recall ever seeing so many Help Wanted signs everywhere I look. Everyone, it seems, is looking to hire. Now, of course, most of the Help Wanted signs I see are for awful, low-wage McJobs with no benefits. These constitute the vast majority of jobs the U.S. economy produces, after all (burger flippers, gas station attendants, sandwich artists, school bus drivers, short order fry cooks, landscapers, salespeople, prison guards, etc.).

But I have heard things on the “back channel” that lead me to believe that their might be shortages even in higher-paying skilled work. The architecture and construction industries, for example, spent so many years actively keeping people out of the industry by increasingly burdensome education and registration requirements, coupled with dismal pay and extreme job insecurity, that they “purged” too many people. Now there is a severe skills shortage. I’ve heard scuttlebutt from job sites that they can’t find enough construction professional with real experience, and the younger people don’t know what they’re doing. So much of the construction industry is based on practical experience (despite the increasing education requirements), and that experience is in short supply and apparently not being passed down to future generations. It’s causing nightmares on job sites and huge salary bumps for the few people lucky enough have the requisite experience. So I’ve heard, in any case.

I suspect that’s likely true in a range of industries, especially those difficult to automate. I’ve been told by recruiters that they are having a very hard time finding candidates for positions. They are somewhat desperate, at least in my own AEC industry.

We know from history that a shrinking workforce increases labor’s bargaining power relative to capital. It’s generally accepted by historians that this was key in the decline of slavery and serfdom, and the rise of a commercial economy after the Black Death. The money hoarded by the upper classes was freed up by the death of up to 30 percent of the population. The same wealth distributed in fewer hands resulted in a parvenu class. They spent their newly-acquired money on higher living standards and luxury products, creating a demand for those products (silk, spices porcelain, tea, sugar, etc.). To fulfill that new demand, Europe developed a commercial economy to import these products into Europe and sell them. The continent-wide wholesalers eventually paved the way towards capitalism in Northern Italy, the Low Countries, and Britain. Ways to increase production were found (especially of cloth and sugar), leading to mechanization and the factory system. But it wouldn’t have happened unless there were a labor shortage.

Nearly all the old industrial counties have shrinking populations today (North America, Europe, Japan). If mass immigration is off the table (as backlashes across the world are demonstrating), than what will the effects on modern capitalism be? Will we see a loosening of wage slavery? A movement towards post-scarcity? Automation in the service of working less and higher living standards instead of just displacement and immiseration?

I have a hunch that business leaders knew this day would come eventually, hence the massive push for immigration we saw beginning in the 1990’s under the Clinton administration. Business leaders–whose job it is to look ahead, after all–could see that the demographic “cliff” of the 1970’s would eventually constitute the heart of the workforce. In order to prevent a serious potential worker shortage in the future, something drastic needed to be done. They likely knew this a long time ago.

And indeed, here are the immigration numbers. Note the timing of the spike (starting after 1980): 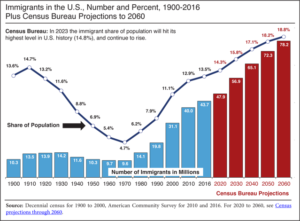 Coincidence? I think not.

Low-end workers were brought in from the cornfields of Northern Mexico and Central America rain forests by diffusion migration. High-end workers were imported via H1-B visa sponsorships from diploma mills in India and Pakistan. Politicians were paid to look the other way, even as their constituents started to die off.

But the business leaders vastly underestimated the resentment this would cause in the face of stagnant wages and widespread economic anxiety in the old industrial Heartland. The backlash led directly to Trump and his opportunistic xenophobia. If the de-facto “open borders” policy of the 1990-2010 United States has truly been reversed by the Trump administration, it would indeed force employers to hire Americans.

I hate to say anything complimentary about Trump. But where I sit, if the ability to import foreign workers en masse has indeed been curtailed, it would lead to a tight job market. And that’s exactly what they’re seeing. Americans have an easier time finding a job now than in recent memory (even if it’s a bad one).

Of course, the other half of this paradigm has nothing to do with Trump. The dropoff in birth rates after 1970 had nothing whatsoever to do with him (I’m pretty sure). But he is the passive beneficiary of the timing. Call it luck, or whatever. All you have to do is not screw it up.

The downside is, of course, that Trump will get the credit for all of this, leading to more popularity. Of course, the Democrats’ embrace of Neoliberalism is what forced them into obscurity, so they have no one to blame but themselves. No wonder rank-and-file democrats didn’t want another Clinton in the White House. Instead, the Democrats ran on identity politics and social issues, a losing proposition. As I (and many others) have said repeatedly, if you prevent people from intelligently discussing the problems with mass immigration by tarring them all as “racists,” the only people who WILL deal with the immigration issue will be actual racists! And that’s what it has led to.

However, what’s less easy to predict is whether wages will rise and working conditions will get better.

Of course, we know that one of the core defining features of Neoliberalism (maybe THE defining feature) is “disciplining” labor. This was allegedly to prevent the wage-price spirals that led to the inflation of the 1970’s. Workers can’t bid up the prices of goods if they can’t get more pay out of their employers, after all (except the costs of education, health care and housing all HAVE gone stratospheric anyways, but that’s another discussion).

A variety of methods have been deployed to do this. Breaking unions was a major one (starting with PATCO and the British coal miners). Automation was another. Shifting work overseas was another. Increasing education requirements was another. Now, increasing consolidation of entire industries in the hands just a few companies is causing monopsonies, decreasing the demand for labor. of Every trick in the book was used to keep wages as low as possible (and profits as high as possible). Workers have been kept distracted from these tactics by an endless carousel of hot-button social issues promoted by the corporate media (guns, abortion, gay marriage, postmodern neo-Marxist college professors, transgender activists, “white genocide,” etc.).

I’ve seem a large number of articles wondering why wages aren’t rising as economic “theory” says they should. Since mainstream economists have to officially pretend that Neoliberalism doesn’t exist, they have to act shocked by this development. The entire economic paradigm is predicated on keeping wages (and inflation) low. Low inflation is good for creditors, after all (and bad for debtors).

But the good news is that the demographic tide may not be able to be resisted. If indeed there is a skill and worker shortage, and mass immigration has been curtailed (even if the process by which it came about has been horrifically ugly), we might actually see a new age of marginally better working conditions for future generations, just like I was told there would be all those years ago.